During the strike, Israel's senior faculty in the country's seven universities did not teach. The reason is that our salaries deteriorated by quite a lot over the past decade. When compared with any other relevant sector, the erosion was at least 30% from 1997.

The main reason for this has to do with the fact that almost all groups in the public sector have a "rank crawl", where the average rank for the same job slowly increases, that is, the "average rank" of a given group increases to fit the growing economy (which typically expands by 1.5% to 2% faster than the inflation rate).

In the Israeli academia, we have four ranks (lecturer, senior lecturer, associate professor and full professor), the same ranks for already many decades. No crawl. It is therefore unfortunate that without the tool of strikes, we cannot correct the constantly forming distortions. In fact, the faculty unions tried negotiating a new work agreement since February 2007 (we were without one for half a decade!), but until the threat of a strike was looming in the air, no one took the faculty seriously.

The strike ended up lasting very long because the treasury was reluctant for any reasonable compensation. For almost the whole duration of the strike, the treasury clerks talked about a ridiculous 3% deterioration. If they would have shown some flexibility, the faculty unions would have had to quickly settle on perhaps half their demands, but since the treasury guys did not bulge an inch, nothing could be settled upon. 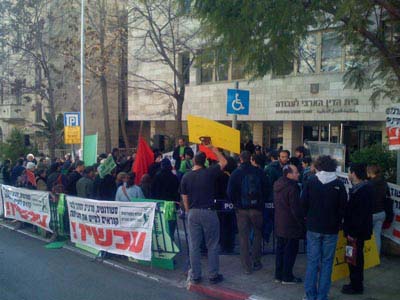 Student and faculty demonstrating against court injunctions, in front of the national labor court. We received an SMS text message from one of the participants in the court discussions saying that our shouting of "no to the injuctions!" are heard perfectly well inside, and convey a clear message.

Then, a few weeks ago, the universities applied for a court injunction to force us back to work. At that point, the treasury people hoped that the court would rule in favor of that request. This way, they wouldn't have to give anything.

The head of the faculty unions, however, were rather clever. It turns out that in Israel, a union is allowed to strike only on matters directly related to their salaries. So, this is what we did. Many in the public were disdained from the fact that the unions did not express, for example, any opinion about a government report aimed at reforming the country's higher education (called the Shohat committee report), or about the employment conditions of junior faculty (e.g., TA's), or the fact that the total number of senior faculty members shrunk by about 15% over the past 6 years. In fact, the head of the unions do care about all these issues, but they were aware of the israeli law prohibiting the strike on issues not directly related to salaries.

Thus, given that the strike was totally legitimate according to Israeli law, the labor court could not issue injunctions forcing us back. At this point, it was clear that the faculty have a clear road to continue the strike and that nothing will break our spirits (in a faculty general assembly at the Hebrew university after the court's ruling, about 400 voted in favor of continuing the strike, and about 5 voted against).

Thus, when it was clear that the academic year is going to go down the drain (and cost the Israeli economy about 1 billion dollars in direct costs, and much more in indirect costs), "suddenly" many israeli parliament members decided to intervene, but more importantly, so did Ofer Eini, who is the head of the Israel's Histadrut worker's union (which is "The" union in israel). With him as the best man, an agreement could be reached. So, over the next 3 years, our salaries are going to increase by twenty-some percent.

One of the interesting points to note is that for the duration of the strike, the faculty had the support of the greater majority of the students. I think they realize, like we do, that this is part of a struggle to save the Israeli academia from the harsh scissors of the treasury. I am also sure that some of the students, who think of an academic career realize that without our struggle, there will be no point is going through the arduous path of a PhD, a post-doc, etc, only to end up in a crippled academia with ridiculously low salaries. Other students, I am sure, think that if they hug us now, they'll get our support when the government will call for the implementation of the Shohat committee report, including, in particular, the increase in the tuition (from about 2500$/year to almost double that), and I think they're correct.

Anyway, now I am back (well, started) teaching. Instead of learning about israeli labor laws and standing with students in picket lines (which I did quite a lot given that I am active in the union), I can now teach the them. I'm busy, but happy!