On the Role of Cosmic Ray Flux variations as a Climate Driver: The Debate

On the Role of Cosmic Ray Flux variations as a Climate Driver: The Debate

Counter to claims by anthopogenic global warming enthusiasts, there is ample evidence to support the idea that cosmic rays do indeed affect climate (evidence will soon be summarized on this site). 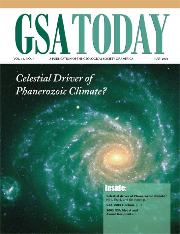 Cover of GSA Today - A geology magazine with a spiral galaxy on it. Some people didn't like it!
Thus, it is no surprise that we find in our GSA Today paper (External PDF, local PDF or HTML) that Cosmic Ray Flux variations appear to be the largest driver of climate change over geological time scales. However, one of the secondary conclusions we reach in the paper is that CO2 had only a secondary climate role over geological time scales, and that Earth's sensitivity to changes in the radiation budget is not as large as most of the climate community believes (which ranges between 1.5 to 4.5°C temperature increase following a doubling of the atmospheric CO2). This of course, has various interesting ramifications, which is why our work attracted many assaults.

Two such assaults appeared in the scientific media, and as such should be addressed. Here we bring the unabridged rebuttal addressing each and every point raised.


The assault by Rahmstorf et al. (in EOS Forum)

Unlike Rahmstorf et al. which was a blind assault, attacking each and every point in our GSA Today paper (including those in which none of the co-assaulters are experts!), the critique of Royer et al. is an honest scientific one. Nonetheless, even if the points raised by Royer et al are valid, they still do not change the primary role that cosmic rays played as a climate driver over geological time scales.
The Jahnke Critique

Last year, a critique by Knud Jahnke appeared on the astro-ph preprint arXiv, in it, the meteoritic-based reconstruction of the cosmic ray flux was heavily criticized. Here you can read all about why this criticism is invalid. It includes a better statistical analysis, one which unequivocally demonstrates that a 143 Myr periodicity does indeed exist in the meteoritic data.

On this server: External links: