Passing the Eddington limit without getting a ticket (cont.)

Passing the Eddington limit without getting a ticket (cont.)

We begin by pointing out that as atmospheres approach the Eddington limit, they become radiative-hydrodynamically unstable. This, as we show below, is crucial for the development of super-Eddington atmospheres. The hunch that such atmospheres may become unstable was already floating around for quite some time, since Spiegel (1976, 1977) speculated that atmospheres supported by radiation pressure would likely exhibit instabilities not unlike that of Rayleigh-Taylor, associated with the support of a heavy fluid by a lighter one, thus leading to formation of “photon bubbles”.

Recent quantitative stability analyses by Shaviv (2001a) do lead to the conclusion that even the simple case of a pure “Thomson atmosphere”—i.e., one with only Thomson scattering of radiation by free electrons—would be subject to intrinsic instabilities and develop lateral inhomogeneities. The analysis by Shaviv (2001a) suggests in particular that these instabilities share many similar properties to the excitation of strange mode pulsations (e.g., Glatzel 1994; Papaloizou et al. 1997). For example, both type of instabilities are favored when radiation pressure dominates over gas pressure. Both arise when the temperature perturbation term in the effective equation of state for the gas becomes non-local. In strange mode instabilities, the term arises because the temperature in the diffusion limit depends on the radial gradient of the opacity perturbations. In the lateral instability, the term depend on the lateral radiative flux which arises from non-radial structure on a scale of the vertical scale height.

Note that when conditions of a pure Thomson atmosphere are alleviated, more instabilities exist. There are of course the aforementioned strange mode instabilities which require a non-Thomson opacity. If magnetic fields are introduced, even more instabilities can play a role (Arons 1992; Gammie 1998; Begelman 2002; Blaes & Socrates 2003). We stress however that the physical origin of the instabilities is not important to our discussion here. The only critical point is that as atmospheres approach the Eddington limit, non-radial instabilities do exist to make the atmospheres inhomogeneous, while the typical length scale expected is that of the vertical scale height.

Inhomogeneities and a reduced effective opacity

The next point to note is that once instabilities are excited in an atmosphere, the unstable modes will grow to become nonlinear. These inhomogeneities play an important role because, once introduced, they change the ratio between the radiative flux through the system and the radiative force.

In the presence of inhomogeneities, the flux through the system can be written as the volume average of the flux: Favr = ⟨F⟩v, where ⟨ ⟩v is the volume weighted average. On the other hand, the force exerted by this flux is favr = ⟨F κv⟩v, thus, an effective opacity can be defined as (Shaviv 1998): $$\kappa_{\mathrm{eff}} \equiv {f_{avr} \over F_{avr}} = {\langle F \kappa_V \rangle_V \over {\langle F\rangle_V}} .$$ The situation is very similar to the case where inhomogeneities are present in frequency space, i.e., in non-gray atmospheres. In such a case, the Rosseland mean will be used to calculate the radiative flux through the system, while the Force mean, which is the flux weighted opacity, is used for the force. The two cases are similar, with inhomogeneities in either frequency space or in real space.

One example where κeff can be calculated is the limit of small isotropic perturbations in the optically thick limit of a Thomson-scattering atmosphere having a negligible gas heat capacity such that ∇ ⋅ F = 0. This limit corresponds to the top layers of an atmosphere of a luminous object (yet deep enough for the inhomogeneities to remain opaque). In this case (Shaviv 1998), $$\kappa_{\mathrm{eff}} = \kappa_0 \left[ 1- \left( d-1 \over d\right) \sigma^2 \right], $$ where σ is the normalized standard deviation of ρ, and d is the dimension of the system. This result demonstrates that inhomogeneities reduce the effective opacity, but the reduction does not take place in a 1-D system. In other words, the porosity effect is intrinsically non-radial.

Joss et al. (1973) have shown that deep inside the star, convection will always be excited as the Eddington limit is approached. Convection, however, can only remain efficient as long as the density is high enough, such that the convection motion can carry enough of the flux to keep the leftover carried by radiation at a sub-Eddington level. Moreover, the most efficient convection is obtained when the internal convective motions approach sonic velocities. This allows us to calculate the density below which convection will fail to carry enough flux to keep the radiation field sub-Eddington. Below this density, the super-Eddington radiation field will drive a wind. This mass loss can be estimated to be: $$ \dot{M}_\mathrm{conv} \approx {L \over v_{s}^2} , $$ which is enormous. Super-Eddington objects should have evaporated on very short time scales, but they don't. To solve the existence problem of super-Eddington states, one therefore requires moving the critical point (the radius where the radiation pressure balances the gravitational pull) higher in the atmosphere to where the density (and ensuing mass loss) is much lower.

In Shaviv (2000) it was demonstrated that the main problem in obtaining a super-Eddington state is shifting the critical point, above which the atmosphere is unbound, upwards to where the density is lower. The existence of a porous layer can serve this role, the “missing link” between the top of the convection zone and the critical point where a wind initiates. It therefore allows the construction of a super-Eddington steady state, the main elements of which are the following:

The Structure of a Nova according to the old lore (top) and according the new super-Eddington theory. According to the old picture, the steady state part of novae should be close to but less than Eddington and given by the classical core mass luminosity relation (Paczynski, 1970). In it, a degenerate core is surrounded by a hydrogen rich envelope which burns into Helium in a shell at its base (through the CNO cycle). If one allows the formation of a porous atmosphere a second solution is obtained. This solution is super-Eddington and has an optically thick wind. This wind is important because it determines the appearnce of the object and because the wind mass loss determines the evolution of the Nova (Shaviv, 2002).

The atmosphere can remain effectively sub-Eddington while being classically super-Eddington, only as long as the inhomogeneities comprising the atmosphere are optically thick. Clearly however, this assumption should break at some point where the density is low enough. From that radius outwards, the radiative force overcomes the gravitational pull and a wind is generated.

The mass loss rate can then be obtained by identifying the sonic point of a steady state wind with the critical point, which is the radius where the radiative and gravitational forces balance each other. We then have M-dot = 4πR2 ρcritical vsonic. Furthermore, this can generally be reduced to the form of (Shaviv 2001b):
$$ \dot{M} = {W(\Gamma) (L-L_\mathrm{Edd}) \over c v_s} , $$
where W is a dimensionless wind “function”. In principle, W can be calculated from first principles only after the nonlinear state of the inhomogeneities is fully understood. This however is still lacking as it requires elaborate 3D numerical simulations of the nonlinear steady state. Nevertheless, it can be done in several phenomenological models which only depend on geometrical parameters such as the average size of the inhomogeneities in units of the scale height (β ≡ d/lp ), the average ratio between the surface area and volume of the blobs in units of the blob size (Ξ), and the volume filling factor α of the dense blobs. For example, in the limit where the blobs are optically thick, one obtains that
$$ W = {3 \Xi \over 32}\sqrt{\nu} \alpha \beta (1-\alpha)^2 .$$
Here ν is the ratio between the effective and adiabatic speeds of sound. Thus, W depends only on geometrical factors. It does not depend explicitly on the Eddington parameter Γ. Typical values of W ~ 1-10 are thus obtained.

The mass loss predicted by the super-Eddington theory was compared with observations of super-Eddington objects which have good observational data. These were two novae which are not very fast and which have the best determined absolute bolometric evolution: FH-Ser and LMC 1988 #1. The theory was also applied to the Luminous Blue Variable star η-Car.

For the two novae, we find that the predicted mass loss rates agree with their observations if W ≈ 10 ± 5, which is clearly consistent with the theoretical estimate for W. The agreement is also with the temporal evolution of the velocities, if those are taken to be the primary absorption line component.

Using W ≈ 10±5, the mass loss equation can also be applied to η-Car, which is an entirely different object from novae (in mass, mass loss rate and duration, photospheric size etc). The predicted integrated mass loss is in agreement older determinations, of 1-2Msun of ejecta (e.g., Davidson & Humphreys 1997), while the terminal velocity is consistently predicted as well. 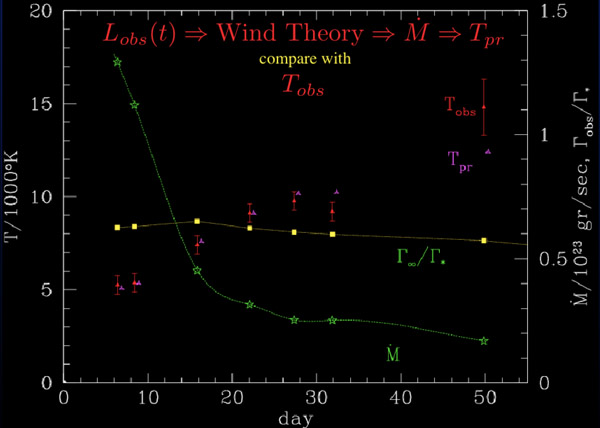 Wind Theory Success: Comparison between the predicted and observed photospheric temperatures as a function of time for nova FH Serpentis. The observed luminosity is used to predict the mass loss rate using the super-Eddington wind loss formula. This in turn is used to predict the location of the photosphere and thus the predicted photospheric temperature Tpr. This predicted temperature can be compared with the observed temperature Tobs. A nice fit is obtained.
More quantitative tests of the theory are in progress, as is its application to other objects (such as Super-Massive Stars).

Links:
Back to page 1
Back to Personal Research
Back to Home page