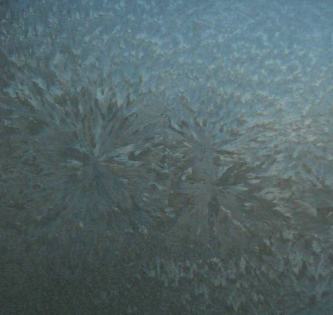 Frost on a Toronto window. Frost formed fast. Because of the numerous nucleation centers, the frost layer looked rather dull.
To get frost on any surface, its temperature should of course be below freezing. Another trivial requirement is to have air with a dew point temperature above that of the cold surface. However, to get nice dendrites, the last necessary requirement is a slow freezing process.

If the temperature indoor doesn't fall below, say, 15°C (which is already unpleasantly cold for an indoor room!), then the window glass will cool below freezing if the outdoor temperature is below -15°C (actually, if there is wind outside while there is standing air inside, the glass temperature can be lower since the air touching the window on the inside could be cooler than 15°C).

If the temperature drop is rapid and the freezing process is fast, the freezing will commence in many "centers", and will look disorganized. The frost layer will then look rather dull. This can be seen in the picture on top. 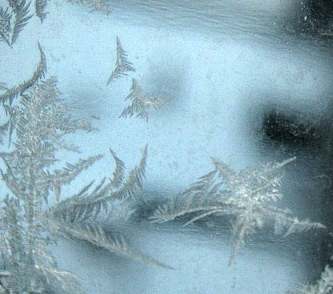 Dendrites on a Toronto window. Frost formed slowly due to special conditions.
The bottom picture demonstrates slow freezing. Here, a Nylon sheet was placed about an inch inward from the glass, and served as "double glazing" (The heating system was off for repair on that day, and the building management distributed the Nylons to ensure that the tenants will not freeze...). The trapped air contained some water vapor, which was available for freezing (which is normally absent from commercial double glazing windows). As the temperature dropped, this small amount of water could leisurely freeze. Because the process was slow, only a few freezing centers began collecting the water. In fact, these dendrites formed over a time scale of a few days.