I recently returned from Lijiang (in Yunnan, China). One of my legs was a flight from Chengdu to Beijing, and it is certainly a flight I will never forget.

After the plane took off in rather dense fog, and then leveled off, the pilot said that we will be cruising at 20,000 meters. Of course, this sounded rather strange, given that the highest I have ever been to was 46000ft (or 14km). It wasn't a good sign that the pilot didn't know at which height we're flying. He probably meant 12,000 meters or 20,000 ft, one of which is on the high side for this 2hr flight and the other on the low side.

During the flight, I received one of the most tasteless breakfasts I ever had, but this is not part of the story.

As we approached Beijing, the sky was clear, perhaps somewhat hazy. The plane started to descend. About 5 min before the landing (ehem... the first landing), there was just a little turbulence, but it quieted down. As we approached the runway, everything seemed fine.

The touchdown was, however, far from perfect. Upon touching the runway, the plane bounced perhaps 10 meters into the air. As it did so, it developed a significant roll to the right (so I could see the ground better...), and then touched again rather hard, with what appeared to be just one set of wheels. Immediately, the pilot increased to maximum thrust and ascended. During these 15 seconds or so, I was sure the plane had it, and that it would flip sideways (at least, that is what would happen to me if I were flying it on a flight simulator, but hey, I am not being payed to fly this thing!).

After taking off again (having touched the ground twice already...), the pilot circled the runway for a second approach, and for the 20min until the next landing, I was thinking on whether the landing gear could withstand such a shock without losing its structural integrity, and of course, what would happen to the plane if it did fall apart upon the 3rd touchdown.

Given that the pilot didn't prepare us for crash landing, nor that there were fire engines ready along the runaway, I guess that the pilot had full confidence that the Airbus engineers did a good job with the design of the landing gear, and indeed they did. I hate to think, perhaps the pilot knows from previous experience that the gear can withstand stronger shocks without a problem...

My suspicion was that the pilot approached the runway too fast, so he couldn't get rid of the plane's lift, which is why he bounced. And because of his roll, the bounce was asymmetrical, thus increasing the sideways roll even more.

As luck would have it, the first person I talked to afterward (on the shuttle between the terminals), was a french pilot trainer, training Chinese commercial pilots. He told me that it is very rare to have such landings, especially considering the very calm weather we had in Beijing. He said that sometimes, if the wind shifts while landing, this could also happen. When I told him that we landed on the same runway as the first attempt, he confirmed that it is was simply a very bad landing. But he also said that putting full thrust and taking off under such conditions is standard practice, since otherwise the plane can stall and crash (as I am well aware from my own flight simulator experience).

Incidentally, the Chinese use foreigner pilots as trainers to force their pilot students to practice their English. They also do that in inner Mongolia where there is little traffic and a lot of clear weather.

Another interesting aspect of this Lijiang trip I had, is that Lijiang airport is at about 2400m. The pressure at this height is lower than the normal cabin pressure in commercial flights (which is usually set to about 2000m). Thus, as we started our decent to Lijiang, the pilot had to reduce the cabin pressure, and not increase it! There was no need of course to equilibrate my middle ear pressure with the outside. (When the outside pressure drops, air leaves the middle ear quite easily, it is when the outside pressure increases that we have to push air in to it, or at least swallow a lot). This effect would be more pronounced if flying, for example, to Lhasa at over 4km.

And now a lesson for my pilot who obviously needs to work on his landing speeds.

How much larger should the landing speed be at Lhasa airport, as compared with sea level? (Actually, the pilot doesn't even know the speed at sea level).

This assumes of course that the atmosphere is isothermal with an exponential decay with a scale height h0: $p = p_0 \exp (-h/h_0)$.

The second thing to know is that at low velocities (such that the mach number is unimportant), and low viscosities (such that the viscosity is not important), the pressure, and therefore the force, only enter the different equations through the combination of $\rho v^2$ (think of the Bernoulli equation for example).

Furthermore, since the deceleration distance is $x = v^2/(2a)$, if the plane can decelerate with the same force (i.e., the same deceleration rate), then it will need a runway which is about 50% longer (or, a lighter load on the plane!). At Lijiang, it is only about 12% faster and 25% longer.

Now that my starbucks coffee at Beijing airport is finished, so is this post.

Addendum: During the subsequent flight I saw a nice gravity wave in the clouds. I'll probably write about it some day, but here is a picture of it anyway. 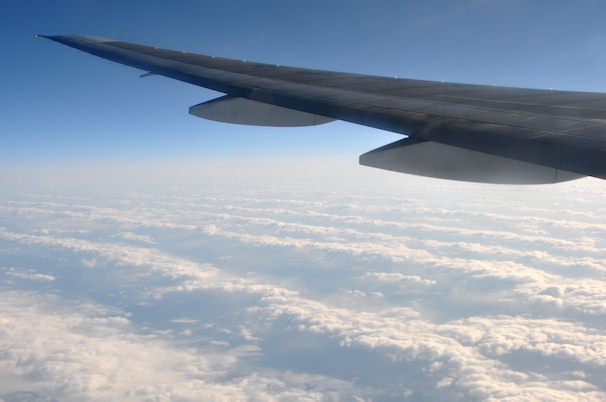 A gravity wave somewhere above the Ural mountains. Picture taken in the flight following the landing incident.