The Transit of Venus

The Transit of Venus 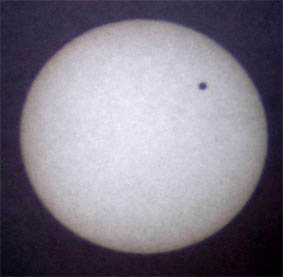 The transit of Venus, June 8, 2004. Photograph taken from Jerusalem by the author, using a 10x50 viewfinder having a 90° prism. The image passing the prism is projected onto a white piece of paper hung on a nearby wall. The image was then photographed with a consumer type camera.
Twice every 117 years or so, Venus transits the disk of the sun. That is, we can see its silhouette in front of the bright solar disk. It is a rare event because most inferior conjunctions (when the Sun Venus and Earth line up) take place with Venus either above or below the ecliptic plane, which is the plane in which Earth revolves around the sun. (In other words, Venus usually passes above or below our line of sight to the sun).

The last opposition took place in 2004. The next one will take place in 2012 , afterwards, only our great grandchildren will be able to see the subsequent transits, in 2117 and 2125 AD.

On the right you'll find an image taken by the author during the June 8, 2004 transit. The silhouette of venus can clearly be seen. Another interesting phenomenon is the limb darkening, the fact that the edges of the solar disk are darker than the center part. This has to do with the fact that rays coming from the edge originate from higher up the atmosphere (because they traverse it obliquely), where the temperature and total emission are lower.

A few interesting anecdotes related to the transits of venus: