How bad are the Hezbollah Katyusha rockets?

How bad are the Hezbollah Katyusha rockets?

Over the past few years, the Hezbollah has been poking a finger in Israel's eye. The usual ritual was to send a few Katyusha rockets to some northern town, after which Israel would respond with a limited retaliation and usually that was that. The Hezbollah kept on doing so to strengthen their internal stand within Lebanon, to appear as saviors and liberators (which many Lebanese now know too well that they are not, e.g., ask Walid Jumblatt).

A Katyusha launch. Also known as "Stalin's organ", the Katyushas are relatively cheap, easy to operate (with virtually no setup time) and can be used in proximity to Lebanese civilians, thus, they're ideal for an organization like the Hezbollah. Their large inaccuracy is not a problem, from Hezbollah's point of view, since the organization anyway target civilians and not specific military targets.
Two weeks ago, they decided to poke eyes once more. They kidnapped two Israeli soldiers from beyond the blue line (the UN recognized international border). Nasrallah and his fellow bandits were surprised from the severity of Israel's response:


"Another Hezbollah leader, Mahmoud Komati, deputy chief of the group’s political arm, told The Associated Press that Hezbollah was surprised by the force of Israel’s reaction to its capture of two Israeli soldiers. He said Hezbollah had expected “the usual, limited” response such as commando raids or limited attacks on Hezbollah strongholds." [NY Times, 26/7/06]

Of course, this surprise came about because they cannot fathom the fact that Israel values the lives of its citizens and in particular of its solders more than anything else. That is, they don't understand that they crossed a red line, not just a blue one.

In any case, the response is not harsh at all given that its goal is not that of retaliation, nor is it to just retrieve the two soldiers (this could have been done with a commando operation). The response's main goal is to neutralize the Hezbollah threat. Using the help of Syria and Iran, Hezbollah has been amassing a stockpile of rockets for already quite a few years. Although Israel should have dealt with the Hezbollah long time ago, it could not have done so previously. Any operation similar to that going on today would have been quickly quenched down by the international community. Until now that is. (You can read more about it here)

Let me concentrate now on a particular issue, the damage inflicted by Katyusha rockets. If you would like to read more about the conflict, I found the analysis by the previous German foreign minister quite interesting. I certainly don't agree with it all, but Fischer does shed light about the timing and reasons of this conflict.

A V-1 rocket above London. Northern Israel today is not unlike London during WWII, which had a slightly higher daily casualty rate (once normalized to the population size).
Since the war began, Nasrallah has been launching a large number of rockets onto northern Israel, including the really nice city of Haifa. He already launched 1500 rockets(!) in the two weeks since the hostilities began, each one carrying about 20kg of explosives. The number of civilian casualties reached 19. Just for comparison, around 2400 V-1 each carrying a 800kg load reached Metropolitan London during WWII, inflicting about 5,500 casualties. In other words, Nasrallah had to use almost 1.5 tons of explosives to kill an Israeli. Hitler was more successful than Nasrallah. He needed 350kg to kill a Londonian on average.

What about the strike probability? From Hezbollah's point of view, it needs about 73 rockets to kill one Israeli. If you are one of the 1 million inhabitants of Northern Israel (as many in my family are) you would look at it differently. If you live in the North, you have a ~ 1.3 x 10-8 probability of dying from each Katyusha rocket, or ~ 1.3 x 10-6 per day spent in Northern Israel. For comparison, Israel has about 450 road casualties a year. This implies that by spending an average day in Israel, you have a ~ 1.7 x 10-7 probability to die from a car (it would be higher if you spent the day in the USA, which has more per capita road casualties). So yes, living in the North is now about 13 times more dangerous than the local roads are, but this is still a small number and it shouldn't be too frightening if you think of it from a statistics point of view. 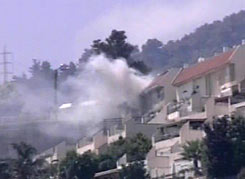 A Katyusha hitting a residential area in Haifa (from Israel Channel 10 news).
Incidentally, in wartime London, the situation was worse. The 5500 V-1 casualties died over somewhat less than a year from a population which was around 8 million. Thus, on a typical 1944 day in London you had a ~ 2.3 x 10-6 chance of dying from a V-1 rocket. This is somewhat more than it is in Northern Israel nowdays. The main difference between the Haifa and London is that there is no way in the world that the Katyushas will keep on falling for a year, such that the cumulative probability to get hit during the whole conflict was much higher in war-time London.

Interestingly, the daily hit probabily is of the same order as the probability of winning the Israeli Lottery (if you buy a ticket...). Thus, staying up north is like buying a Lottery ticket every day and hoping you wont win.

The main problem with the Katyushas is different. As sad as having casualties is (and it is VERY sad for those families who had a member hit by one), it is relatively a small problem from an objective point of view. The more serious problem is the fact that it quenches Northern Israel's economy. Many businesses simply stall to a halt because of the Katyusha's. An upper limit for this loss would be the fraction of the GDP which comes from the million people over the 4 weeks of the war (realistically assuming that the Katyushas will last another 2 more weeks). Since the annual GDP per capita in Israel is $23,000, halting the northern economy for a month would mean a 2 billion dollar loss, causing a 1% to 2% dent in the economy.

A Katyusha heated by a high intensity laser (more in this video)
There are of course other losses, both direct (e.g., physical damage from direct hits) and indirect (e.g., loss of investments), but I would imagine that they cancel out the fact that the GDP estimate is an upper limit (e.g., my brother is still working in the North, so he is no cause for lost GDP, but that would be canceled out by a tourist who will decide to take his vacation in Greece instead of Israel).

It is interesting to note that the development of an anti-missile laser system (Mobile Tactical High Energy Laser - MTHEL) is considered expensive, with something like a half billion dollar price tag, but when you compare it to the economic benefits it could have had, it's cheap! Too bad the system is still not operational. I just hope the Hezbollah will be disarmed quickly and the lives of Israelis and Lebanese could return back to normal.