By shaviv 5 Comments
Blog topic:
general physics, general science, weather & climate
A few weeks ago, a few students observed a nice phenomenon in the sky (like many others in the Jerusalem area). Knowing I liked this kind of stuff (and that I may be able to explain it), they called me out of the office to look at the sky. 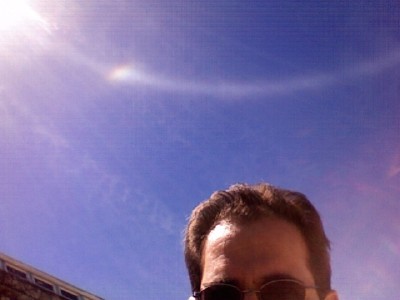 A Parhelic Circle
Above us was a nice and almost complete parhelic circle, together with 2 bright sun dogs. Unlike the usual 22° halo, often seen around the moon and occasionally around the sun, the parhelic circle keeps a fixed angle from the horizon, and not from the bright object, such as the sun or moon. This type of halo is not very common. In central Europe, for example, they can be seen a few days a year. At low latitudes, such as that of Jerusalem, they are very rare.

So, how does this halo form? The fact that the parhelic circle "sees" the horizon implies that gravity has to play a role in aligning the ice crystals. A little digging, reveals that up to 20% of the ice crystals can be horizontally aligned hexagonal plates. Interestingly, when these fall they align themselves such that they maximize the drag force. This is very similar to falling leaves. Any small rotation of the ice crystal generates a net force on the windward side of the crystal (i.e., the one facing the wind as it falls down) which is larger than the drag on the leeward side of the crystal. This gives rise to a net torque which rotates the crystal back to its horizontal direction. 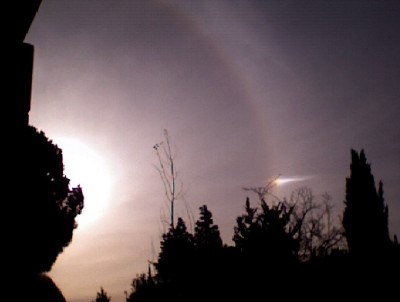 A 22° halo with a sun dog.
Later that day, when the sun was about to set, a beautiful 22° halo formed, again, accompanied by two bright sun dogs. The 22° Halo is generated by randomly oriented ice crystals. The halo is then formed from those crystals which happen to be aligned such that one internal reflection (and refraction through the surfaces) points the light ray into the observer's direction. This is unlike spherical drops that require no special alignment (and which produce the well known rainbows).

One interesting result of this required alignment is that the halos are generally smeared and are therefore achromatic (without any color). That is, at any given direction, two light rays at two different colors can be reflected from two crystals aligned slightly differently. The notable exception is the reddish hue in the inner edge of the halo. Because the index of refraction at the red wavelengths is the smallest, the red cannot be smeared over by other colors at the smallest angles of deflection.

More weather stuff on sciencebits.com can be found here.