You are about as likely to die from a meteor as you are from a plane crash!

You are about as likely to die from a meteor as you are from a plane crash!

By shaviv 1 Comment
Blog topic:
astronomy
It may sound strange, but you are probably as likely to die from a meteor as you are from a plane crash. Think it's bizarre? Here is the statistics.

If you exclude commuter and other smaller types of aircrafts, the statistics based on accidents between 1995-2004 implies a fatal accident every 52.6 million flights. So, if you fly for example 10 flights every year, you have a 1 in 5 million chance of ending the year prematurely. Note that the distance travelled is only of minor importance since most accidents take place in the first or last parts of a flight.

What about meteors? Well, during the recorded history of the human race, there were several recorded cases of a direct meteor hit. Irrespective however of whether they are mostly real or not, they certainly don't add up to anything close to the rate of airplane crash casualties. So obviously, being hit by a small meteorite and getting killed by it, is certainly less probable than having an unfortunate flight.

So how can meteors be as bad as plane crashes? 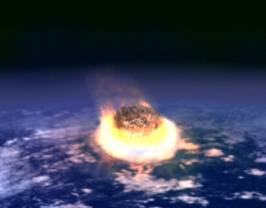 Although very unlikely, there is still a finite probably that the whole human race will be wiped out by a single fatal blow by a bolide impact (asteroid or comet). What are the chances that this will kill you? (and all your fellow beings...).

Every somewhat more than a million years, an object which is large enough to kill half of humanity hits Earth (e.g., read here). Thus, every year, you have a chance of 1 part in several million to be wiped out, together with everyone else. This is equivalent to the chance of not surviving 10 or so flights! Thus, if you're a frequent flyer and fly more than 10 flights, you should be more afraid of your plane (or how your pilot slept the night before), and if not, you should be more afraid from interplanetary space and the surprises it may store for the human race.

And here's a last interesting thought to end this post. During the taxi rides to and from the airport, you are about 10 times more likely to die than you are on the actual flight...