By shaviv 2 Comments
Blog topic:
weather & climate
I tried to bring some order to the zillion or so pictures I have, and stumbled upon pictures from a fantastic hail storm we had west of Jerusalem in October 2004. The largest stones were recorded in Kibbutz Tzuba (where incidentally a cave was recently discovered, which is said to have been used by John the Baptist, but that is totally irrelevant I guess). The hailstones were up to 5 cm in diameter. Three cars belonging to the Kibbutz had their windshields shattered. Ours which was there at the time wasn't shattered but it did crack. As the pictures demonstrate, there were an amazing number of dents. Luckily for us, we had total insurance coverage, so many of the sheet metal parts were simply replaced, as was the front windshield. Moreover, given that it was a "force majeure" event, our insurance premium did not change. ;-) 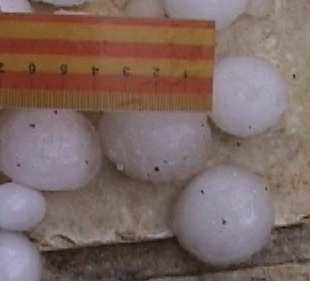 4 cm in diameter hail. Fell over Mevasseret Zion (western suburb of Jerusalem) on Oct 29, 2004. In nearby Kibbutz Tzuba, hailstones measuring 5 cm in diameter were measured. 3 car windshields were shattered. 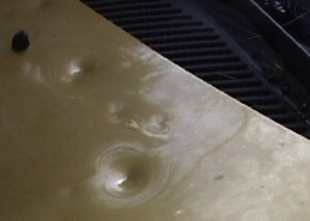 Dents in the sheet metal of a Renault Clio, caused by 5 cm hail.

The hail pictures were taken in Mevasseret, a few miles north east of Tzuba. In Mevasseret, the stones were "only" 4 cms in diameters or less. Doesn't sound like much, but it does make a significant difference in the energy of the hail stones.

Here is a physicists take on it.

Speed of Falling Hail and the necessary updraft in the thunderstorm

The terminal speed of a falling hailstone is obtained by finding the equilibrium between the gravitational pull downwards and the air drag upwards.

Energy in the hailstones

For comparison, the largest hailstone ever measured had a radius of about 5 inches. Thus, it was moving at about 155 mi/hr and had about 40 times the energy of the hailstones which shattered the wind shields in this middle eastern storm.