Jerusalem was under siege, again. Last time it was Bush. This time, it was snow because of which we had two snow days. So, I didn't have to teach and instead could build a snowman with my kids.

Now for those who are unaware of Jerusalem's climate, this is not unique. In fact, the average annual amount of snow in our capital is 10 cm, just as much as we received this year. Of course, it varies quite a lot. A fifth of the years that have no snow, while the record is of 1 meter in Jerusalem's storm of the century, which took place in 1920. Incidentally, in 1470, snow fell continuously for 2 weeks, and Jerusalem was besieged for a whole month. 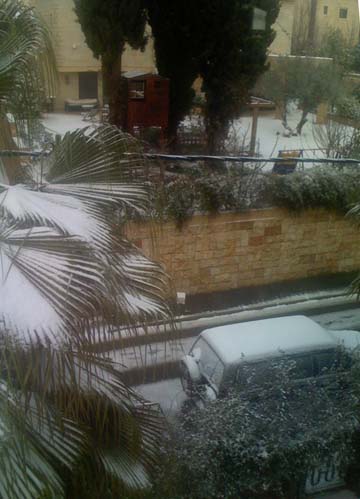 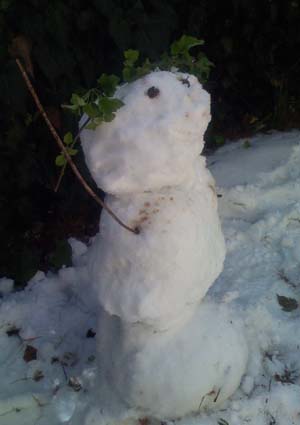 A palm tree in snow and a snowman. The snow was "sticky" because most of the snow fell at above freezing temperatures.

Anyway, the actual storm included very strong winds (over 100 km/hr gusts), and snow at different places, including Jerusalem, the Galilee mountains in the North, and even as far south as the Mitzpe Ramon (over looking the Ramon Crater, i.e., snow in the desert!).

During the storm, I stumbled upon the following radar animation. When looking at it, I realized a few interesting things about it.

First, it is quite evident that very little rain passes into Jordan. The reason has to do of course with orographic effects. As the clouds move over Israel, they have to climb up 800 meters due to the topography of the Judea and Samaria hill chain. As the air mass has to rise, it cools adiabatically and further condenses water vapor, forcing it to rain out. After passing the hills, the air has to descend 1200 meters into the Jordan valley. It thus heats up and hinders any condensation. It if for this reason that my western suburb gets almost twice the annual amount of rain as the Eastern neighborhoods of the city, just 20 kms away. Then, as the clouds have to climb up the Jordanian mountains (typically 1500 meters above the Jordan valley), a little more rain can be squeezed from the clouds.

The second thing to note about the radar is that there appears to be a large building at an azimuth of about 65° to 70° from the rain radar (i.e., around ENE from the radar). The building has a large westward facing wall. This can be seen in the form of a reflection along a streak, which reflects the rain coming from the WNW direction, that is, as the rain clouds move to the SE, the rain along the streak moves in the opposite direction!

The third interesting point to note about the rain is that over the southern part of the country the rain appears to be part of open cell convection, that is, convection in which the rising air (and therefore rain) takes place along the boundary of convection cells, while the descending air does so in the center of the cells. 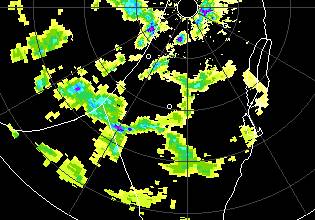 Open Cell Convection? The radar clearly shows almost hexagonal cells which have a typical diameter of 40 to 70 km (the dead sea is 67 km from north to south for comparison). 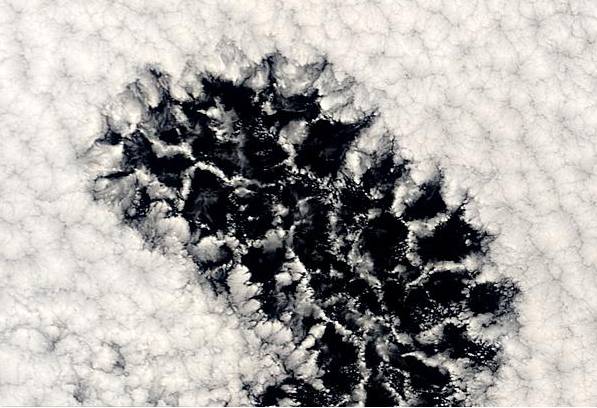 For comparison, these are marine clouds over the Pacific. The center includes an area with open cell convection (air rises and forms clouds on the cell boundaries), surrounded by closed cell convection (which is what most people are used to).

To me this seems strange, since I was always under the impression that open cell convection appears only under certain conditions and only above oceans. Of course, it could be that this is not an example of open cell convection.., but if it is, then what caused it to appear over land? And if not, what is it then? A coincidence?