By shaviv 0 Comments
Willis Eschenbach had a post on wattsupwiththat.com attacking my post on this blog, which explains why the new sunspot reconstruction may be irrelevant to the solar climate link and also discusses the recent paper I have co-written. I am not writing it as comments on whatupwiththat is for several reasons, but the main one is because Eschenbach's comments were condescending and pejorative. I am not going to degrade myself and have a discussion with him at his level on his web page.

Now to the point. It is hard for me to find even one correct statement in Eschenbach's piece, which leaves so many wrong ones to address.

Let me start with his main crux. Eschenbach claims that in the paper by Howard, Svensmark and I, we have approximated the solar cycle as a sine with arbitrary phase instead of using a direct proxy. He then continues to fit the satellite altimetry data to the ENSO, and then fit the residual to the sunspot number. When he finds no correlation, he resorts to all sorts of negative remarks to describe our work, and in particular writes that "The journal, the peer reviewers, and the authors all share responsibility for this deception".

To begin with, as Brandon Shollenberger commented in the comments section of that article, the use of harmonic analysis cannot be deception as we have specifically wrote in the paper what we are carrying out this analysis and why. A deception would be carrying out one analysis and writing that we did another.

But more importantly, to reach his conclusions, Eschenbach assumes that if solar forcing has a large effect on climate, the sea level should vary in sync with it. This assumes that the sea level adjusts itself immediately to changes in the forcing. This ignores the simple physical fact that the heat capacity of the oceans is very large such that the oceans are kept far from equilibrium. Instead, it is the amount of heat, and therefore the sea level through thermal expansion that is expected to be proportional to the solar forcing. In other words, instead of comparing the sea level to the sunspot number, which is what Eschenbach did, he should have compared the sea level change rate to the sunspot number. If we look at his figure, and differentiate the sea level by eye, we see that this is exactly the case! 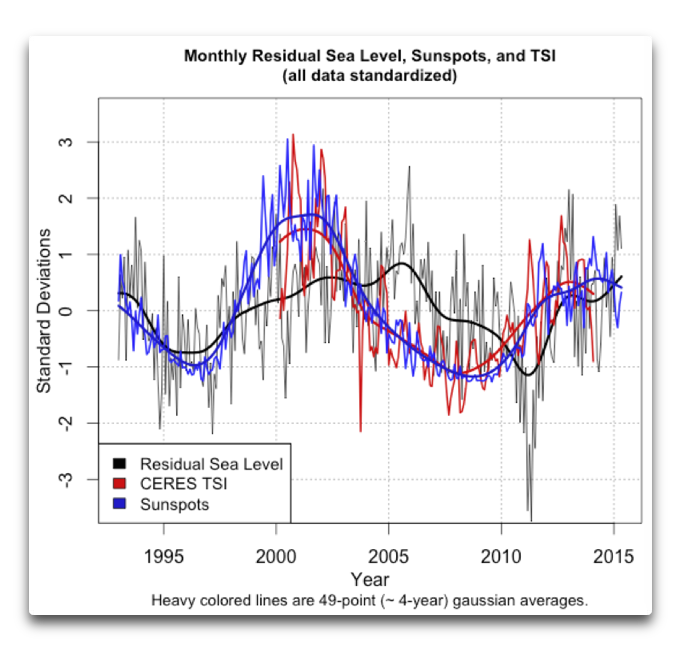 Figure 1: Eschenbach's figure, where he correlates the altimetry data after it was detrended and had the ENSO component removed, with the sunspot number. He claims that there is no fit, but in fact, one expects the sea level rate to be largest when the sun is most active, and the sea level rate to be smallest when least active. This is seen in the data as expected!
It is quite upsetting that Eschenbach did this mistake even though it was clearly explained in our paper, and it is also explained in my previous paper from 2008, where one can clearly see that the sea level change rate varies in sync with solar activity over more than 80 years.

We also explain in the present paper why the altimetry data is important to pin point the exact phase, if there is a phase "mismatch" between the solar forcing and the sea level change rate. This is because any deviations from the "zero order" model in which sea level is just the integral of the absorbed heat (for which the sea level rate is in sync with the forcing) will teach us about additional processes, such as feedback of the climate system and the trapping of water on surface reservoirs.

Studying this phase mismatch is simpler and clearer in a harmonic analysis, which is why we used it, but it is also possible to do it with a more direct solar proxy. I know this, because we also carried out the full analysis, but during the refereeing processes decided to leave it out as it didn't add any more physics while making the results more opaque. If anyone is bored, he or she can read this "supplementary material" describing this analysis here.

Eschenbach also complains that we have a seven parameter model and goes on to cite von Neumann's story about fitting Elephants. So first, because the fit is not empirical but physically based, one has to use all those relevant to describe the physics. For example, if we wish to describe the length of a rod as a function of temperature and force exerted on it, we will need the average length as well as both the thermal expansion coefficient and at least one elastic modulus. Can you describe this model with less than 3 parameters? Similarly, if you want to describe the solar forcing on sea level you need more than one parameter because solar forcing can primarily change the sea level through thermal expansion or though trapping of water on the surface. Since to first approximation the thermal expansion is the integral of the forcing and while the trapped water is the second integral of the forcing, at least 2 numbers are required to describe the effect of the solar forcing on sea level (two sines, or a sine with some phase), which is exactly what we have. Eschenbach writes that we used 3 numbers to fit the solar forcing, but the period wasn't a free parameter. It was set by observing the last solar cycle. A second trivial mistake is the claim that I have never heard of von Neumann's elephant quote. In fact, not only have I heard about it, I mentioned it in a 2007 blog post that has elephants in its title! Trivially wrong and mixed with libelous claims.

Next, in the beginning of his analysis, Eschenbach complains that "The 10Be beryllium [sic] isotope truly sucks as a solar proxy when used as it was in their study". This is wrong for several reasons.

First, we didn't use it in "our study". I just mentioned Beryllium 10 as an example of a solar activity proxy showing that activity increased over the 20th century.

Second, although the Beryllium 10 records have their problems, due to for example, a variable precipitation rate onto the ice sheets, if one compares them to Carbon 14 which are recorded in a completely different type of record, that of tree rings, one finds a generally good agreement between the two independent records, indicating that both reflect the same variability in cosmic ray spallation. For example, see this figure.

Third, Beryllium 10 clearly show that solar activity increased over the 20th century. Anthony Watts himself wrote about it in his blog, when he discussed Usoskin's paper studying this.

Fourth, Eschenbach compares the Beryllium 10 to the sunspot number and finds a lousy correlation. He deduces from that, that Beryllium 10 "sucks as a solar proxy". However, this misses two important points that I made on my blog post:


Let me summarize Eschenbach's mistakes. Some are trivially wrong, some much worse.

I should also add another point which is directed primarily to Anthony Watts. The Wattsupwiththat website used to keep very high standards. It also served as a very important outlet where discussions about various climate views, including those which do not conform to the dogmatic mainstream could be heard. However, the low standards borne from Eschenbach's article, both in science and in style should be avoided. Anthony Watts should not expose himself to libelous type of writing, which is exactly what Eschenbach has done. Writing false statements is one thing, it is Eschenbach's right for free speech, but writing that my colleagues and have "deceived" as well as other derogatory remarks that intend to tarnish our scientific integrity has no place in any scientific discussion.