On the formation of ship tracks

On the formation of ship tracks

By shaviv 7 Comments
Blog topic:
general science, weather & climate
On of the interesting manmade climate phenomenon is that of Ship Tracks, whereby a ship, with all the exhaust particles its releases, can change the characteristics of clouds in its wake. 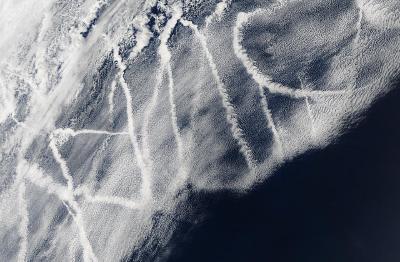 Ship tracks off the Oregon/California cost (more at NASA / Visible Earth).
Over the oceans, such particles are not overly abundant. This means that a passing ship could significantly increase the local density of cloud condensation nuclei. This effect is of course amplified by the fact that ships tend to burn the cheapest, most polluting fuel they can find. They're in international waters after all.

In the regions with the larger particle density, the same amount of condensing water vapor now has more particles to condense upon. This means that the clouds are then formed from more numerous but smaller droplets. Overall, we therefore get a much higher surface to volume ratio. Since the volume is the same (the given amount of condensing vapor), we get a larger total reflecting surface area. These clouds are therefore whiter. They also tend to live longer because it is harder for those smaller drops to grow in size, and rain out. The net result is that the pollution wakes of ships can manifest themselves as a white streak in the clouds, as is apparent in the first figure.

Last week I was on such a polluting boat, and to my amazement, one could actually see the cloud of dark polluting particles linger behind the boat for miles. The ship definitely polluted like hell! 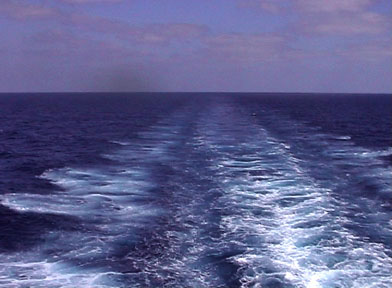 The wake of a large boat, traveling at 14 knots westward. Somewhat north of the wake (i.e., to the left) one can see a gray semi-circle smog left by the boat, which was pushed northwards by a constant southerly wind.
I didn't see any effect on clouds, however, I wasn't in the pristine pacific air after all. It was the eastern mediterranean somewhere south of Cyprus, with many land originating pollutants, dust particles, etc. So I am not sure whether meaningful ship tracks can actually form there (Image Google'ing Mediterranean Ship Tracks doesn't pop up any ships tracks from this sea). Also, I am not sure that the ship tracks are actually apparent from the ships producing them, that is, if you were to stand on one of the ships producing the tracks in the first figure, would you be able to see the "track" in the clouds? Any sailor out there who can comment?